Why have energy prices risen so much?

The rising cost of energy continues to dominate the headlines, and we are very aware of the impact this is having on our customers.

So why have energy prices risen so much already, and why are they set to rise even further in the future? Back in September, when we first started to see prices rising, we published this blog explaining what was happening in the wholesale market. As it’s been almost a year, we wanted to share a further update on the market, explaining why prices are still rising. In this blog, we’ll explain why wholesale energy prices are continuing to go up, and how that impacts customers.

First, though, we want to reassure you that we’re doing our best to keep energy bills as low as possible, absorbing as much of these rising costs as we can, and helping customers to obtain additional support. You’ll find a summary of ways you can access support – both from the Government and from So Energy – at the end of this article. Although the events of the last year have driven many suppliers out of business, we also want to repeat the reassurance we gave in December that we’re not going anywhere.

Why are prices going up?

In the UK, the bill we receive for gas and electricity into our home is made up of several factors. About half comes from the wholesale cost of gas and electricity with the rest coming from the cost of the infrastructure that delivers the energy to your home, metering, environmental support schemes, and so on.

Worldwide gas prices have been steadily rising over the last 12 months, with the cost of supplying an average home on a one-year tariff increasing by over four-fold compared to this time last year. The main driver for rising wholesale prices is the increasing cost of gas globally. 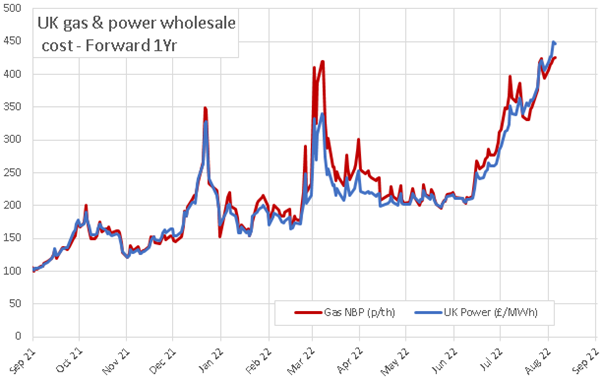 Higher energy prices are a growing problem around the world. And in today's markets, if the price of gas rises, it rises for everybody and already has led to around 30 suppliers going bust in the UK alone.

However, the cost of gas is not immediately passed onto consumers because of the UK energy price cap. The price cap used to change every six months but in these unprecedented times, from October, it will refresh every three months. This means that prices observed in the markets now will feed into bills in October. Unfortunately, we may not see falls until well into 2023. 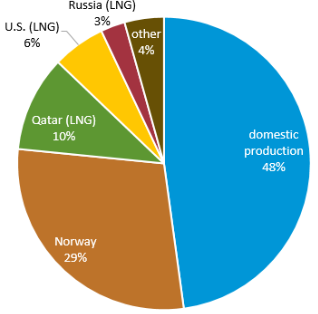 The UK has been a net importer of gas since 2004, and due to the interconnected nature of the market, prices tend to be similar throughout Europe. The chart on the left shows imports from Norway representing about a third of our consumption, about a fifth of our gas consumption arrives as LNG (liquefied natural gas), including about 5% of consumption from Russia.

In the UK over a third of demand comes from gas power stations that burn it to generate electricity. Therefore, if the price of gas that these power stations purchase goes up, the price of electricity at which they can sell also increases. As the proportion of renewable generation rises, this link will disconnect and therefore many European countries are accelerating their deployment of renewable generation in response to this crisis.

But what has caused gas prices to rise sharply since the middle of 2021?

Although we are all feeling the effects of rising energy prices at home and at work, it is a global issue that has been caused by some far-reaching and unexpected reasons:

Demand for energy plummeted during the Covid pandemic as office buildings and factories across the world shut down. In response, supply shrank too, but while demand roared back after restrictions eased, supply was slower to restart, causing an imbalance between supply and demand.

Russia’s invasion of Ukraine has had a significant effect on energy prices. Russia is a major player in world energy markets, and it is the second biggest producer of gas with the largest reserves in the world. The EU, which imports more than 40% of its gas and 30% of its oil from Russia, has reacted by imposing a ban on most Russian oil imports by the end of the year. In response, Russia has steadily reduced the amount of gas it flows through the three major pipeline routes which means that it is exporting about a quarter of the volume that it has historically shipped to Europe.

Liquefied natural gas (LNG) - natural gas that has been converted to a liquid - is super-cooled and transported in large ships. As these ships can move around the world, prices in different importing regions tend to converge. Gas demand in Asia has grown faster than the supply of LNG, and lower European imports have helped to balance the market.

EU gas storage was very full at the start of the October 2020, so more gas than normal could be withdrawn over the colder months. It is normal to refill storage during the summer when gas demand is lower, but less gas than usual went into storage during the summer of 2021. Consequently, prices rose as companies tried to get hold of enough gas for last winter. In addition, the UK has very low gas reserves compared to the rest of Europe, which means there is almost no way of stockpiling gas to use it when needed most.

When will prices fall?

There are several factors that could signal a reduction in prices. The first is a resolution of the conflict in Ukraine and the return to historic levels of gas flows from Russia. Failing this, many European countries are already implementing demand reduction measures and are launching campaigns to persuade households to use less energy this winter. A combination of full European gas storage sites in advance of colder weather would also reduce the risk of a shortage of gas in the New Year. Finally, a warm winter, reducing gas demand for heating would mean more gas remained in storage lowering the price for future.

If you provide 100% renewable energy, why are prices going up?

So Energy buys 100% renewable electricity. This means that for every MWh of electricity supply to you, we work with renewable generators to match that MWh with a green certificate, or REGO.

The price we pay for wholesale energy is based on the blended prices of all sources of energy in the country, which includes wind, solar, coal, gas, and nuclear. National Grid then distributes the electricity to each household – so the actual electrons you receive is always supplied from this blend, regardless of which tariff the owner has opted for.

On average, about a third of the electricity from the grid is from renewable sources, while more than a third is powered by natural gas. Because gas is still needed in the mix to supply electricity to the country, the wholesale prices across the country are heavily influenced by the cost of generating from gas power stations. So even though it’s cheaper to generate energy from renewable sources, the price that we all pay is affected by these big increases in gas market.

Getting support paying your bills

If you are concerned about paying your bills, there have been a number of different measures introduced by the Government:

The government is also offering cost of living support to households. Check if you could be eligible here: https://costoflivingsupport.campaign.gov.uk/ .

Information about grants to help to heat your home can be found at: https://www.gov.uk/government/collections/find-energy-grants-for-you-home-help-to-heat

If you’re having difficulty paying your bills, please contact us. Support is available for customers who have difficulty paying their bills. If you’re uncomfortable coming to us directly, there are charities that offer free independent advice and support and it’s not just limited to your energy bills – we are happy to work with them: